No More Drilling With Waterlase Dentistry

You know you should go to the dentist every six months, but you don’t. Why? Because you hate the shot, you hate the drill, and you hate the pain and numb lip afterwards. Good news: No more drilling. Dr. Robb uses WaterLase, a breakthrough technique that eliminates the drill, the need for a shot, and the evening of pain and fat lip. 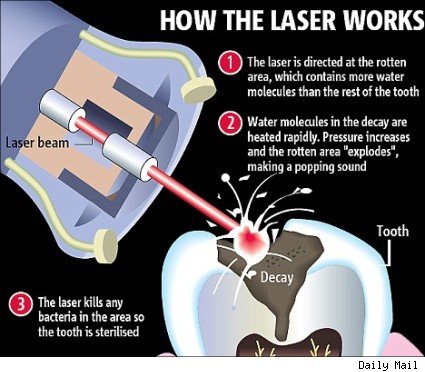 WaterLase Dentistry uses laser energy and a gentle spray of water to perform a wide range of dental procedures – without the heat, vibration and pressure associated with the dental drill. With many procedures, it’s possible to use less anesthetic, and often no anesthetic at all.

Your WaterLase Dentist can often get you in and out of the dental chair faster, since it’s less likely that you’ll need an injection – research shows that the vast majority of patients don’t. It’s nice to avoid that shot, isn’t it? Not using anesthetic can allow your dentist to perform procedures that used to require more than one visit in a single appointment. Also, a WaterLase Dentist can perform procedures that once meant an additional trip to a specialist, saving you even more time.

Lasers have long been the standard of care in medicine for many surgical and cosmetic procedures such as LASIK, wrinkle and hair removal and many others. WaterLase® was approved for hard tissue procedures in 1998 and since has been cleared for numerous additional dental procedures. Thousands of dentists around the world have performed thousands of procedures with less need for shots, anesthesia, drills and post-op numb lips.

The potential for cross-contamination between patients in the dental operatory is a real and widely documented risk. WaterLase technology has the potential to reduce this risk.

WaterLase is a cleaner, safer dental instrument. Its flawless tip surface does not harbor debris or bacteria like abrasive surfaces of burs and root canal files. It works without contact to the tooth, and WaterLase YSGG laser energy kills bacteria.